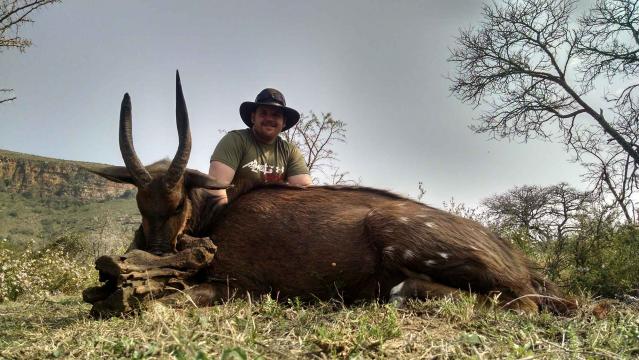 The minute I met Brent Beck it was clear that the next 18 days of hunting was going to be a massive amount of fun and sidesplitting laughter.
We started our Safari in the Deka Tail Safari area, which borders the world-renowned Hwange National Park.  Buffalo signs were everywhere and we were hoping that we would catch tracks crossing one of the roads leading to and from the few water sources in the area.

It was July; the bush was very dry and stalking anywhere except the well-worn game trails was like walking on Cornflakes!  There was a particular waterhole next to the airstrip that had some very promising Buffalo activity and tracks.  We soon got into a routine of finding a track, tracking them down and then judging the trophy quality of the bulls.  Swirling winds and noisy approaches made each stalk interesting but after a few frustrating days we decided to move further north in the Concession where the Mopani-dominated-Savannah improved our visibility.  Again we started by checking the waterholes but as there are hundreds of elephant in the area, each time we approached the water points we found that the elephants had been there and covered the buffalo tracks!

We hit a break mid morning one day when a herd of Buffalo, numbering a few hundred, had crossed the road. The tracks where fresh, dung still steamy and wet; and after a few hundred yards of tracking them we could hear them bellowing and grunting.  The buffalo were following a drainage line that ran through a number of “koppies” (small, steep hills). We picked up the pace, moving speedily around the hills trying to get in front of the herd.  We then found them lying down, as it had started to warm up considerably, yet after analyzing the herd we realized that we were only roughly in the middle of this sea of buffalo as they were spread out over a huge area.  An old bull stood against a tree but his spread was only 31” so we passed him on.
Inching closer we soon spotted a huge bodied bull lying down, but we could not judge his horns as his head was behind some brush. We worked our way around and onto one of the little koppies when we suddenly found ourselves 34 yards from the bull. We could now clearly see the beautiful trophy.  Both Wayne Bartlett (the registered Zimbabwean PH) and myself looked at Brent and smiled knowingly as he steadied himself on a small tree.  The first shot found the sweet spot, while a couple of hundred buffalo started running in all directions, with our Bull trying to keep up.  Two more perfectly placed bullets and he was down!

It is an honor and a privilege to do what we do and to share our knowledge with hunters, clients and friends and to help them live out their African Safari Dream!